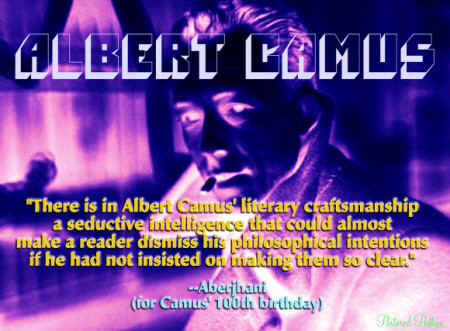 “For myself, I cannot live without my art. But I have never placed it above everything. If, on the other hand, I need it, it is because it cannot be separated from my fellow men, and it allows me to live, such as I am, on one level with them.” ––Albert Camus, 1957 Nobel Prize in Literature Acceptance Speech.

When contemporary authors talk about addressing a subject in three different literary works, they generally mean a fictional or nonfictional trilogy, such as J.R.R. Tolkien’s Lord of the Rings, or Toni Morrison’s series of novels (Beloved, Jazz, and Paradise) linked by the author’s meditation on different eras of African-American history.

For Albert Camus, the term triptych is more appropriate than trilogy because he launched his literary career by tackling the same subject simultaneously through three different genres: a novel, a play, and a collection of essays.  The novel was The Stranger, the play was Caligula, and the essay collection was The Myth of Sisyphus. Possibly even more impressive than his ability to complete this triptych was his ability to actually get the novel and essays published in the same year, 1942 (the play would have to wait two more years).

By that time, Nazi Germans had occupied Paris and Camus found himself basically trapped in a French mountain village known as Le Panelier.  Unable to travel about freely or to use the country’s regular postal service, he had to rely on friends and allies to place his work safely in the hands of Gallimard Publishing. The company itself had remained active during the invasion and published Camus’ work with the consent of German officials. One noteworthy alteration to the original edition of Le Mythe de Sisyphe was the removal of his brilliant essay on Franz Kafka.

To read the full article by Aberjhani please click the link:
Text and Meaning in Albert Camus’ The Myth of Sisyphus (part 2 of 4) – National African-American Art | Examiner.com.