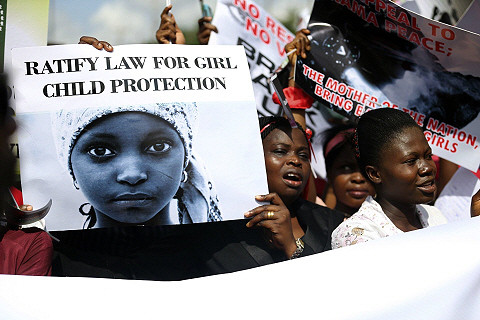 In chilling contrast to the lyrical verse and candy-sweet images that millions of American families are preparing to enjoy on the 100th anniversary of Mother’s Day, May 11, the families of almost 300 abducted school girls in Nigeria are struggling to maintain sanity while praying for an end to the ordeal.

The students reportedly were abducted from the Government Secondary Girl School in Chibok, northeast Nigeria, on April 15 (some reports say April 14). On May 4, Nigeria’s President Goodluck Jonathan issued an appeal to the international community for assistance finding and returning the students, who range in age from 16 to 18. President Jonathan stated, “This is a trying time for this country… it is painful,” and promised parents that he would not allow the kidnapping to go unsolved.

Video in which the extremist leader of Boko Haram, Abubakar Shekau, claimed responsibility for the kidnappings, surfaced May 5. In the video, Shekau boasted that he intended to sell some of the girls into slavery and force others into marriage. On May 6, additional reports began to emerge that another eight girls, aged 12 to 15, had been abducted from a village near Boko Haram’s suspected stronghold.

Social media, blaring the hashtags #BringBackOurGirls and #StolenDreams, helped to increase international outrage over the mass kidnapping itself. However, outrage has also intensified over the failure thus far to recover such a large number of young women. Since the original kidnapping, some 50 of the student managed to escape while approximately 220 remain captive.

That the mass abduction is criminally heinous and spiritually tragic is something not even a marginally-informed person would deny. It should not, however, be described as an accurate expression of Islam. When the terrorist labels it as such, he is doing nothing more than utilizing guerrilla decontextualization to replace the spiritual goals of the religion with an individual lust for power and a deadly disregard for human life.