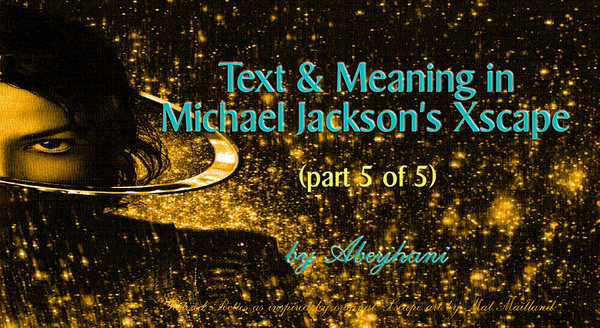 “In more ways than one, his status as a ‘superstar’ served largely as a vehicle that allowed him to render as much service to humanity on as many levels as he could.”––Article Excerpt (Aberjhani)

The lucky number seventh track on Xscape, “Blue Gangsta,” is the perfect musical metaphor for the would-be thug of steel who discovers he is as vulnerable to the anguish of a broken heart as anyone else. The L-O-V-E giveth and the L-O-V-E taketh away.

The menacing progression of chords and scheming vocals that made “Smooth Criminal” so irresistibly sinister is brought to its knees in “Blue Gangsta.” With atmospheric rhythmic tension generated by snare percussions, violins, and anxious horns, Jackson’s voice with impeccable delivery creates a brooding drama of the heart:

The song extends the album’s theme of love as a multifaceted adventure through great joy and sometimes equally great pain. In “Blue Gangsta” we view it from the painted perspective of a realist, as Jackson has done before in compositions that explore love’s less euphoric side. The title also gives a nod of respect to the musical genre most famous for lamenting shattered hearts: the classic Blues themselves.

Tempo-wise, the title track of Michael Jackson’s second posthumous release holds its own with such fever-driven classics as “Don’t Stop ‘til You Get Enough, “Wanna Be Startin’ Somethin’,” and “Tabloid Junkie.”  That Rodney Jerkins worked extensively with Jackson on the original recording from 1999-2001 and was able to revisit it more than a decade later makes it easier to accept the contemporized version as something the megastar himself might have done.

to portray him in the media as a “whacko” or “pervert” rather than as the brilliant creative artist and exemplary humanitarian that he was.