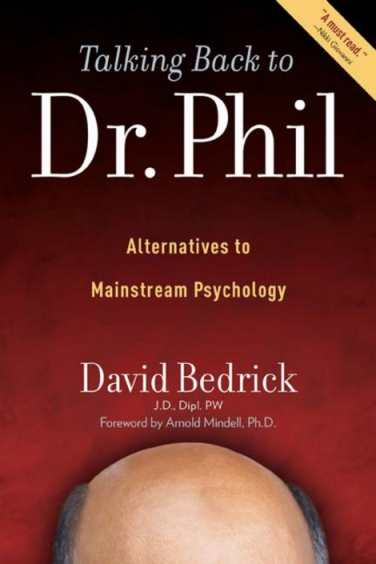 Cover of “Talking Back to Dr. Phil” by love-based psychology advocate David Bedrick.

You can catch the previous segment of this 4-part series by Aberjhani by clicking right here. Part 3 starts now:

Another principle derived from David Bedrick’s meditations on process-oriented psychology suggests treating “the powers behind difficulties or disturbances as allies instead of enemies.” That could be a tough sell for people dealing with issues such as spouse abuse or drug addiction, but the author makes his case well enough. Moreover, the debatable nature of his love-based manifesto in its entirety is not lost on Bedrick. In his own defense and that of those he would help to heal themselves and their communities, he notes the following:

“Like the US Constitution, I do not adhere to majoritarianism, but rather protect marginalized people and forms of expression from being seen as ‘problems’ and subjected to the shame of psychological labeling and cultural prejudice, and I explore people’s difficulties to seek the seeds of their positive transformation.”

Each section of Talking Back to Dr. Phil describes an episode of the popular Dr. Phil Show that goes a long way toward helping Bedrick make some vital points. Just as importantly, these episodes are followed by precise explanations of how they represent applications of mainstream psychology, and, how love-based principles could have taken those who were in distress a step or two further toward resolving their problems.

Take, for one example, an episode presented in the chapter titled “Rank Dynamics.” In it, Dr. Phil helps a woman to confront her husband’s mistress, or lover. The husband, who had appeared on the show previously, this time around opts to avoid the television cameras. With the husband physically absent from the discussion, the two women treat each other as antagonists. Even worse, with accusations and unbridled judgments presented in the form of questions, Dr. Phil himself rallies his audience against the “other woman” to create “an atmosphere conducive more to retaliation than to open and honest discussion.”

To read the full article by Aberjhani please this link: