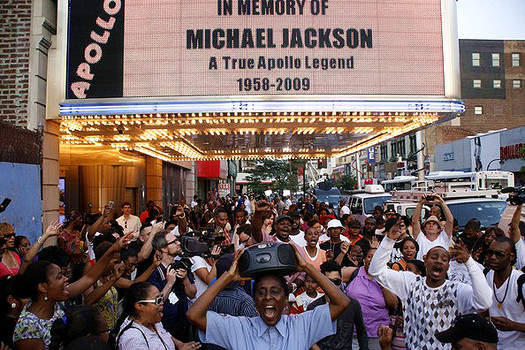 Following the death of Michael Jackson during Black Music Month 2009 a crowd
gathers and dances outside the legendary Apollo Theater in Harlem, New York.
(photo by Getty Images)

The basic idea underlying the concept of Pan Africanism is that of cultural awareness and connection leading to mutually beneficial cooperation between people of African descent throughout the Global Village. It is a concept which those who are possibly more politically, philosophically, and economically motivated have promoted at least since the year 1900.

One of the ways this powerful theory has met with notable success in practice has been in the area of music. To help ensure the viability of African-American music in particular, famed music producer Kenny Gamble and broadcast executive Ed Wright in 1979 persuaded then President Jimmy Carter to declare June as Black Music Month. The crowning event that year was a celebration concert held on June 7 at the White House. Featured on that occasion were representatives of the broader spectrum of black music, from the rock and roll rebel guitar of Chuck Berry to the sacred harmonies of gospel choirs.

“It was a great moment and beautiful day that I won’t forget,” said Gamble, speaking with Dyana Williams in an interview for Frequency News. One of the architects of what came to be known as the “Sound of Philadelphia,” Gamble added that observance of the month remains important for a number of reasons:

“It is a reminder of what a great art form Black music is. Our legacy and present contributions still encourages those of future generations. It is a cultural expression of multiple American genres. We need to keep it going.”

The producer’s interviewer, Ms. Williams, played an integral role herself in the establishment of the observance.  President Carter’s 1979 declaration did not declare Black Music Month as an ongoing annual event. That did not occur until Williams reportedly co-wrote, with Rep. Chaka Fattah (D-PA) of Philadelphia, House Concurrent Bill 509, which sealed the official deal in 2000.

The Value of a Legacy

Nevertheless, each president since Mr. Carter has recognized June as Black Music Month. It took on deeply poignant significance with the death of Michael Jackson in June 2009. In addition, the loss in recent years of other iconic figures such as Whitney Houston, Abbey Lincoln, Lena Horne, Donna Summer, and Don Cornelius have further magnified the value of the legacy.