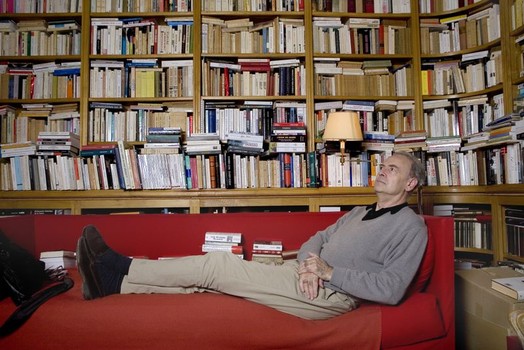 (photograph of Patrick Modiano by Reuters and El Pais)

Though presented by the UK-bookmaker Ladbrokes with an odds of only 10 to 1 to win the 2014 Nobel Prize in Literature, France’s Patrick Modiano pulled ahead of Kenyan author Ngugi Wa Thiong’o and Japanese novelist Haruki Murakami to do exactly that October 9.

Modiano was not among the contenders depicted in an October 7 Wall Street Journal illustration showing  Thiong’o, Murakami, America’s Joyce Carol Oates, Philip Roth, and Salman Rushdie rushing on race horses toward the Nobel finish line. The “race” was widely considered a toss-up between Thiong’o and Murakami.

In his announcement of the award, Professor Peter Englund, the permanent secretary of the Swedish Academy in Oslo, Norway, said the award went to Modiano, “for the art of memory with which he has evoked the most ungraspable human destinies and uncovered the life-world of the occupation.”

Modiano is an author of dozens of novels, children’s books, and film scripts. A number of his works have been translated into English, Spanish, German, and Swedish. His novels, the latest of which is “Pour que tu ne te perdes pas dans le quartier” (So That You Do Not Get Lost in the Neighborhood, or So That You Do Not Lose Yourself in the Neighborhood), often blend history, autobiography, and mystery. He has been described as a writer who “plays” with the detective genre to employ it in a way that is both entertaining and thought-provoking.