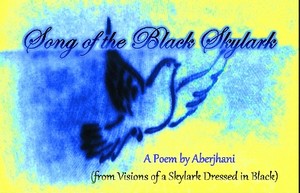 Does the enigmatic figure of the Black Skylark referenced in this blog title have anything to do with Edgar Allen Poe’s “The Raven” (1845), with Walt Whitman’s “The Mystic Trumpeter” (1872), or Abram Joseph Ryan’s “Song of the Deathless Voice” (1880)? It shares with Poe’s classic poem the image of a dark mystical bird. On the other hand, the presence of an eerie beguiling melody establishes a strong link to Whitman’s and Ryan’s poems.

It dawned on me that the book was actually conceived many many years before…In fact, it began as part of a writing assignment in a class taught by Wendy Parrish at Macalester College in St. Paul, Minnesota, way back in the day before people used the phrase “back in the day”…. That was when I wrote a poem called The Dark Bird, describing a creature that was frightfully heroic in life while being somehow oddly connected to death.

At that time, the word “metaphysics” was unknown to me so I was more driven by a feeling than a concept. The central image that formed around that feeling disappeared for two decades before re-emerging and evolving into the Black Skylark that not only soars through the pages of Visions, but through those of a novel also [now] completed.

The poem is set in the city of Savannah, Georgia, but its themes are universal. Readers are cordially invited to decide for themselves how well it fits into the tradition of the American Halloween poem pioneered by Poe, Whitman, and Ryan:
Song of the Black Skylark (poem) by Aberjhani on AuthorsDen.